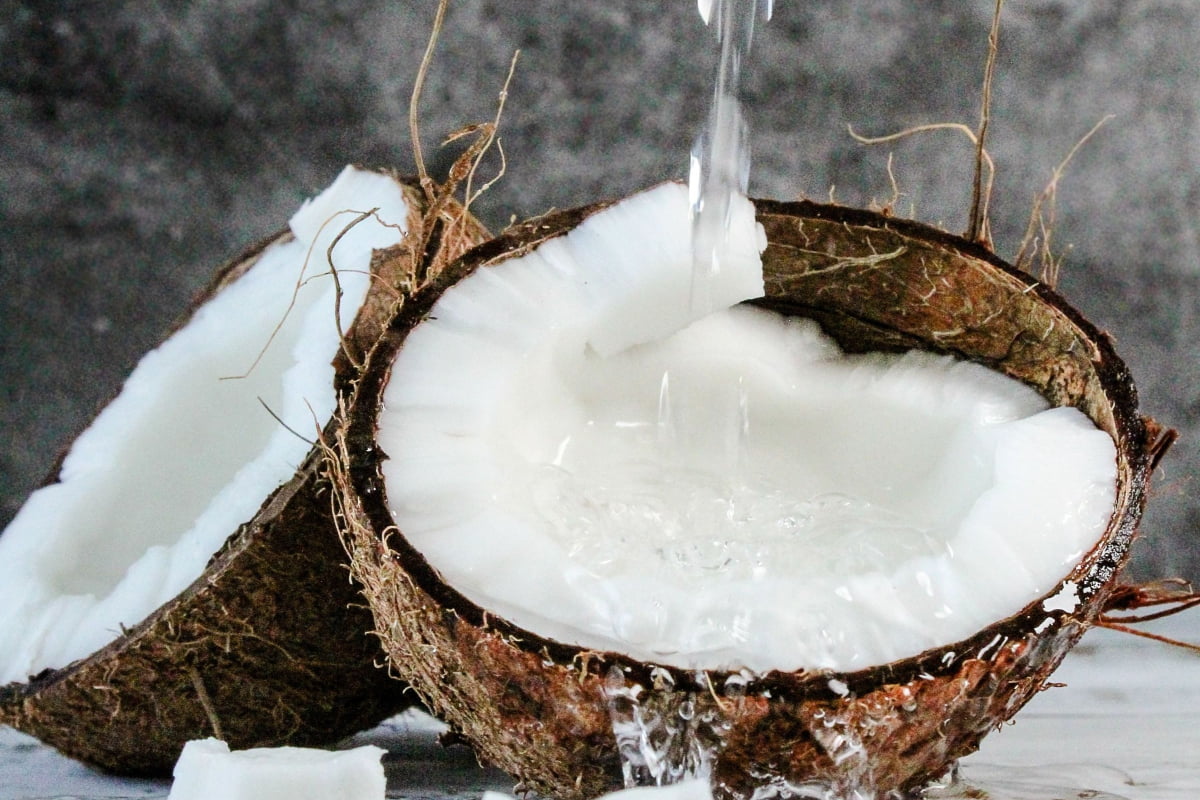 Coconuts are simply delicious in all its presentations, and did you know there are many different types of coconuts?

This delectable fruit is widely enjoyed around the world; whether you love it for its water, milk, or flavorful meat, coconuts have that tropical touch we all crave for once in a while, plus it has tons of benefits and its oil is considered a superfood and it’s universally acclaimed.

When you think of coconuts, you probably envision yourself in an exotic place while holding one in front of the beach. But truth is, coconuts can quench our thirst and at the same time, be used in cooking, cosmetics, and even furnishing! This versatile fruit is so much more than what you’d expect.
Since coconuts are so popular and you most likely consume them one way or the other, here you’ll learn everything you need to know about them, their types, uses, benefits, and a lot more.

History Of The Coconut 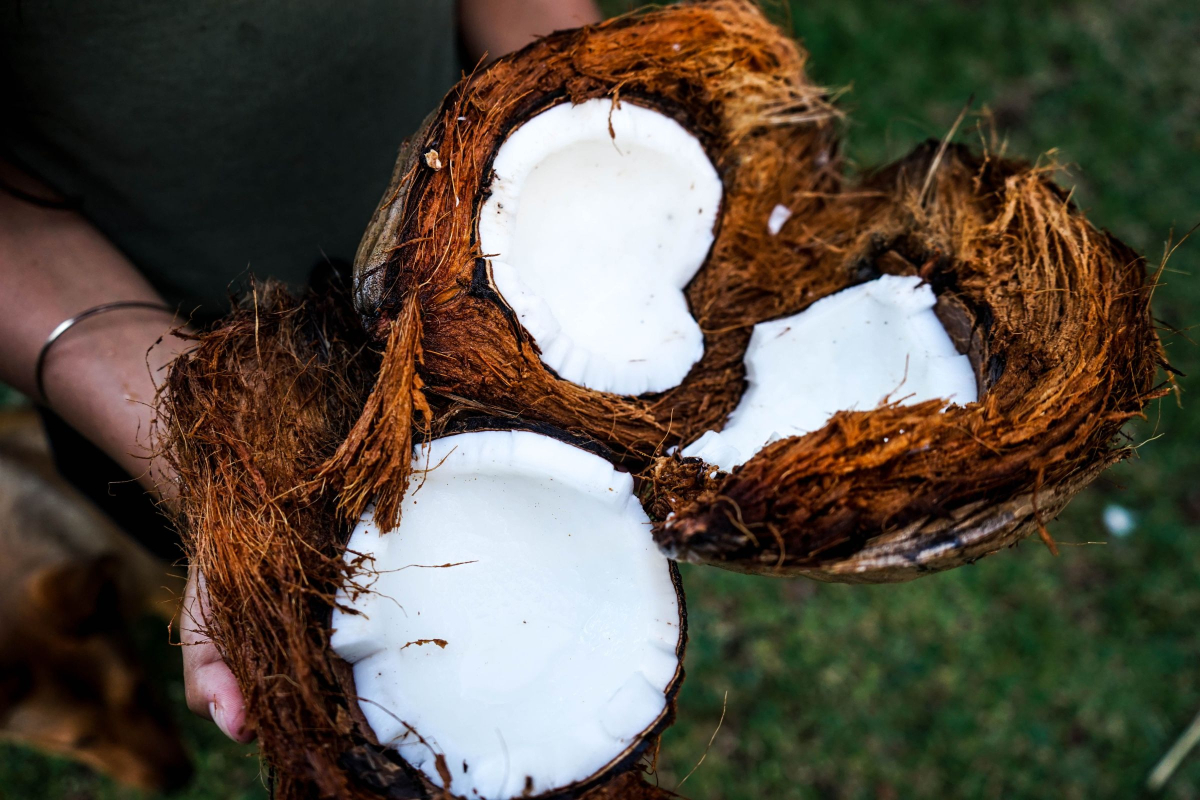 Don’t be fooled by coconuts sugary presentations, this fruit has tons of benefits for our health. Check out some of its benefits below:

Other Uses For Coconuts

Coconut and its tree, the coconut palm, offer a wide range of uses. You are probably familiar with coconut uses in the cooking world but coconuts don’t stop there.
Here are some coconut uses you may be surprised to find out:

Since coconuts come from different places, it’s only natural that we have different types of them. Coconut palms have been categorized as either ‘tall’ or ‘dwarf.’

Tall coconut palms, like their name indicates, are vast and can exist for around 90 years. These generally reach a height between 50-60 feet and are can grow at 3,000 feet above sea level.
Tall palms flourish in different soils including cloddy red clay to tropical isle sand. These are also resistant to pests and diseases and multiply through cross-pollination.
Coconut from tall palms is usually the medium and large size and comes in orange, red, yellow, and green.

Dwarf trees only stick around for about 50 years and present a height between 20-60 feet. These trees self-pollinate, are prone to disease, and generally bear more fruit than tall palms.
Its coconuts come in green, yellow, and orange. Coconuts also come in a hybrid state.

Coconuts can only come from the coconut palm, scientifically known as Cocos nucifera. The different types of coconuts differ in terms of genetics, color, and taste. Find below the most common subcategories. 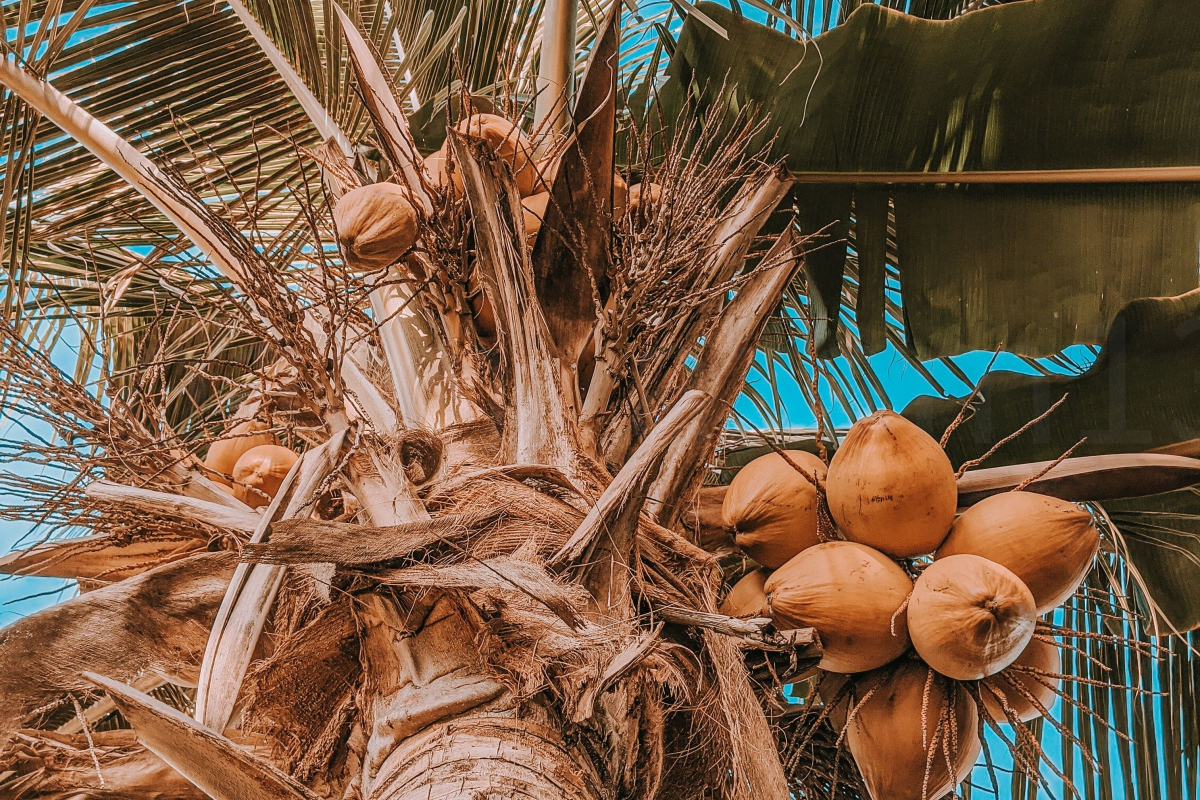 This is a hybrid palm that grows in tropical parts of the world. These emerged in the 1800s by Indonesian colonizers. These are considered the most predominant dwarf coconut in the world. Coconuts from this tree turn pale yellow and are medium in size, weighing around 25-28 ounces. 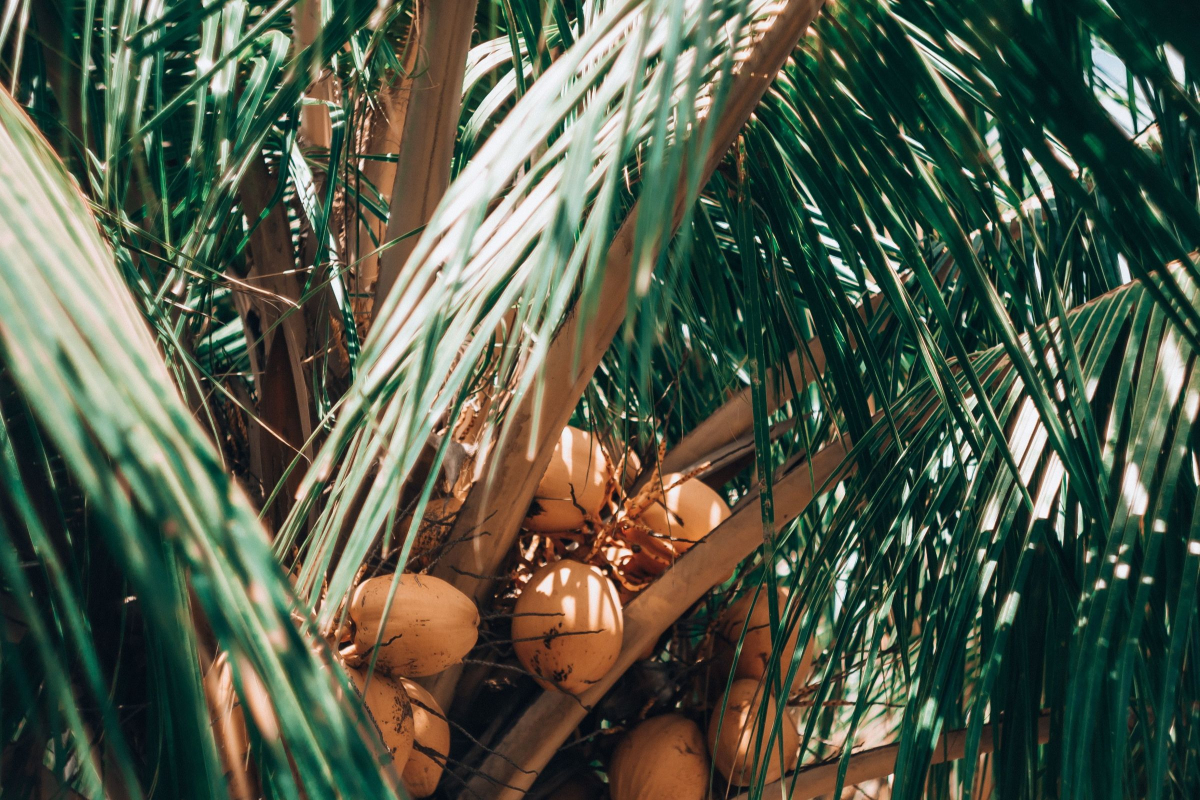 If you want surprisingly sweet coconut water, you can certainly obtain it from this tree. Dwarf orange coconut palms produce reddish-yellow colored nuts and take about four years to start flowering. They self-pollinating and its life span is about 40 years. 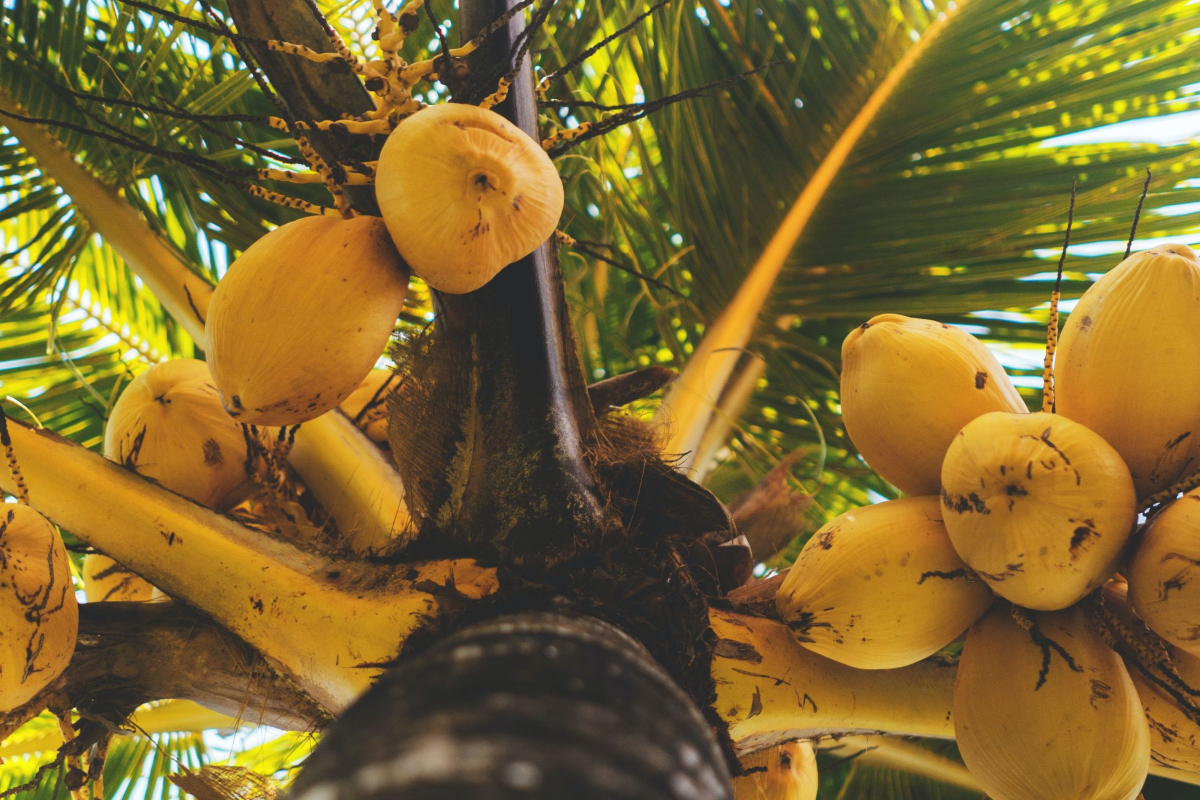 Golden Malay coconut meat is ideal for cooking and its water perfect for refreshment.
This tree is originally from Indonesia but it’s grown mostly in Bulgaria. It doesn’t have to grow in the tropics as long as the roots are shield from low temperatures. As it becomes mature, coconuts turn bronze or reddish. These are early bloomers that can go as tall as 39 feet. 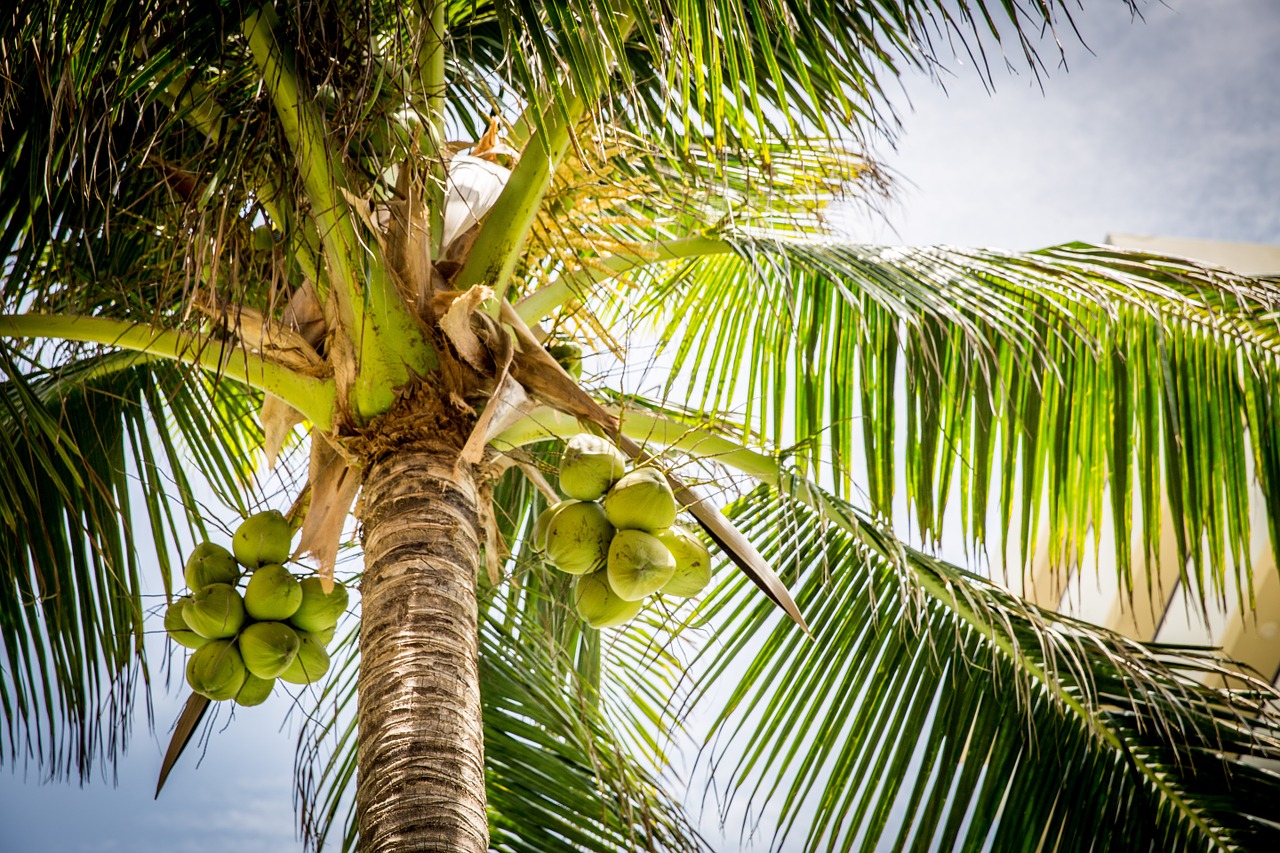 Coming all the way from Jamaica, this is a hybrid tree that’s also known as sturdy coconut -due to its ability to endure lethal yellowing. These grow as tall as 60 feet and develop best under temperatures above 40°F. 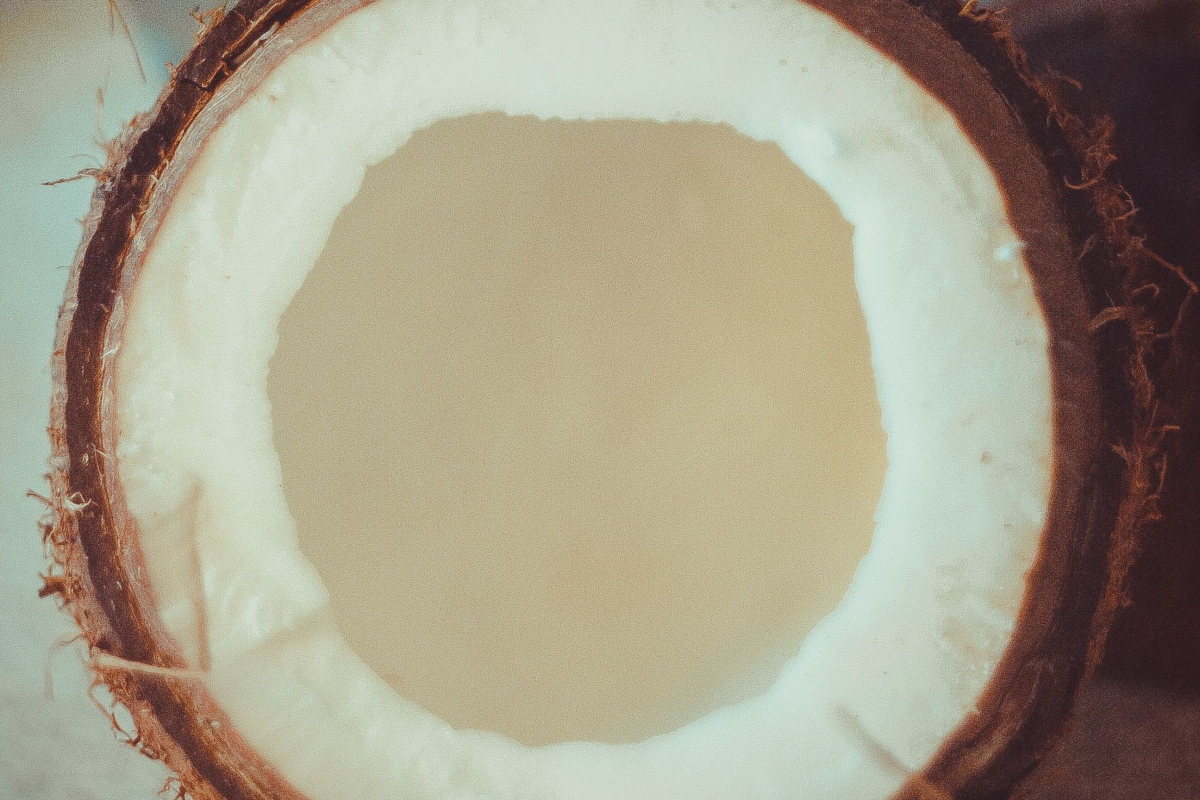 King coconut makes a sweet and refreshing drink; you’ll recognize this type of coconut due to its football-appearance, it comes all the way from Sri Lanka and some parts of India. This 66 feet palm gives bright-orange coconuts within months and will produce nuts all 12 months of the year.
King coconut is really above all, it offers vitamin C, potassium, sodium, amino acids, and can help improve your metabolism and digestion! 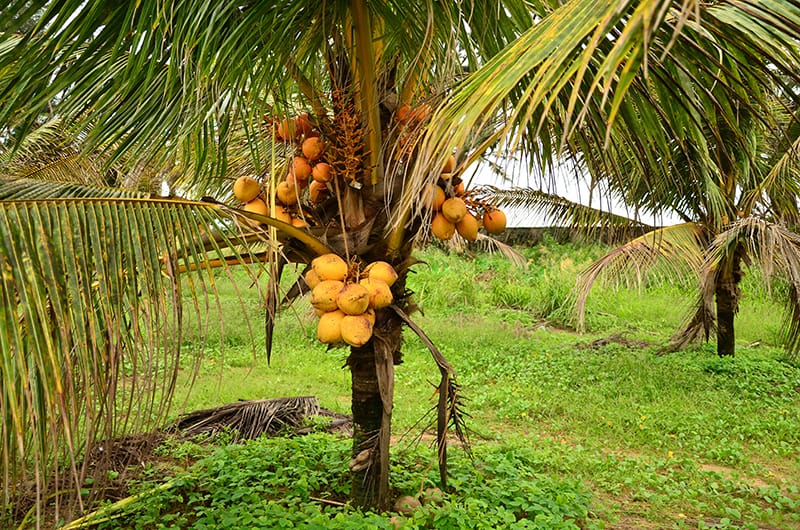 These palm trees make for a great view thanks to their distinctive leaf shape making it appear quite decorative. Fiji also called, one tough nut, is widely known for its ability to resist diseases. 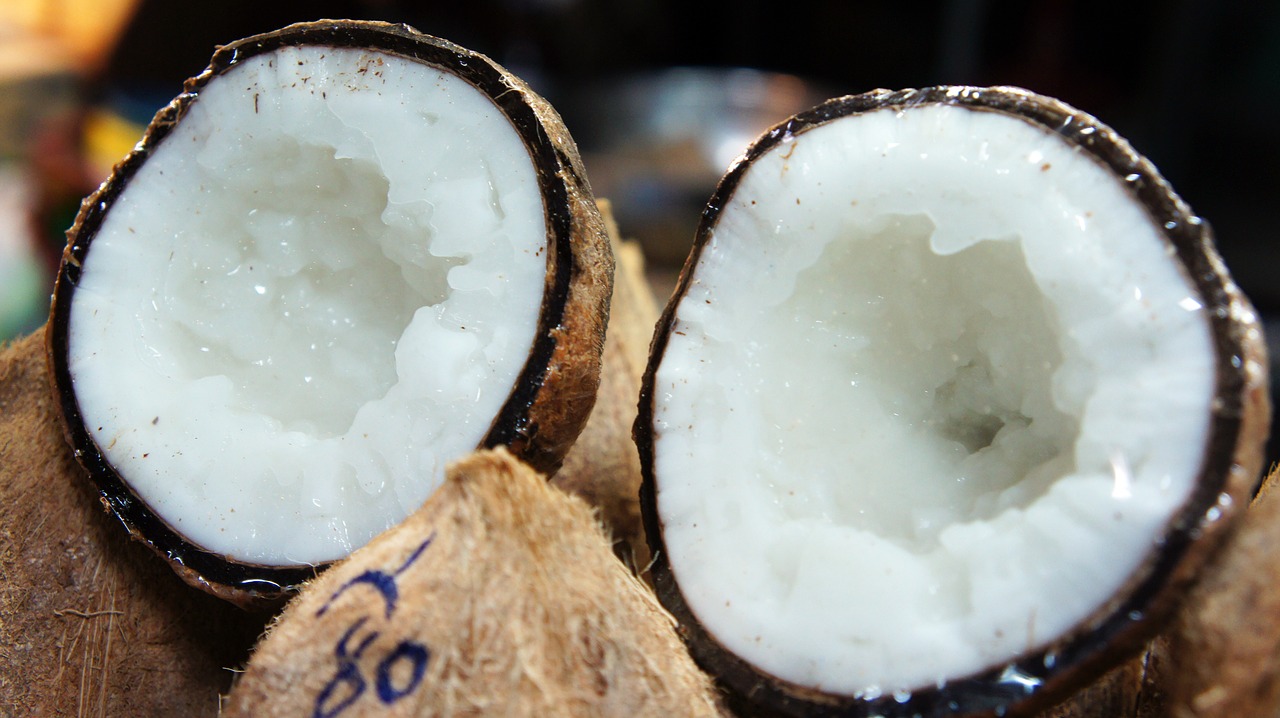 This is a hybrid mutant also known as kopyor coconut. Though is not widely grown, this fruit is considered a treat in Asia, due to its gelatinous flesh, the reason why it is used in dessert recipes. 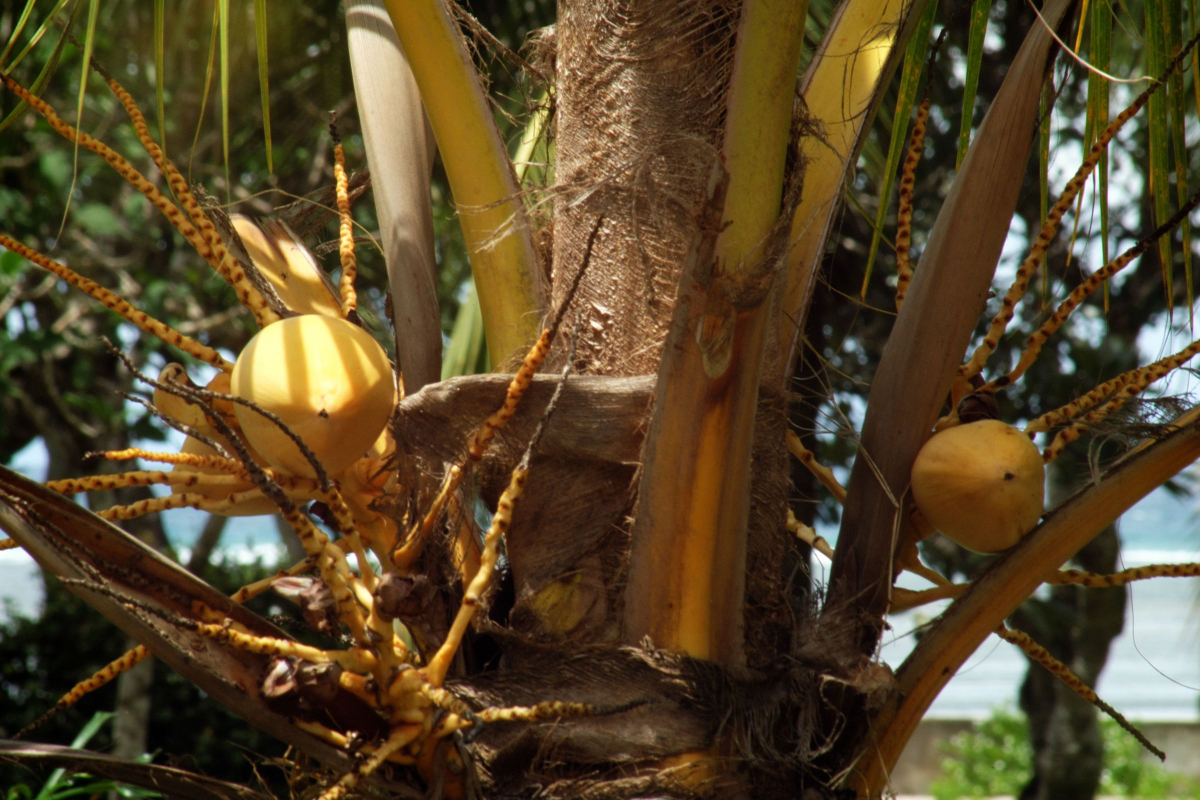 If you want the coconut from this palm tree, you’ll need to wait for about 6-8 years. This tree ideally develops in drained sandy soils or red loamy dirt. 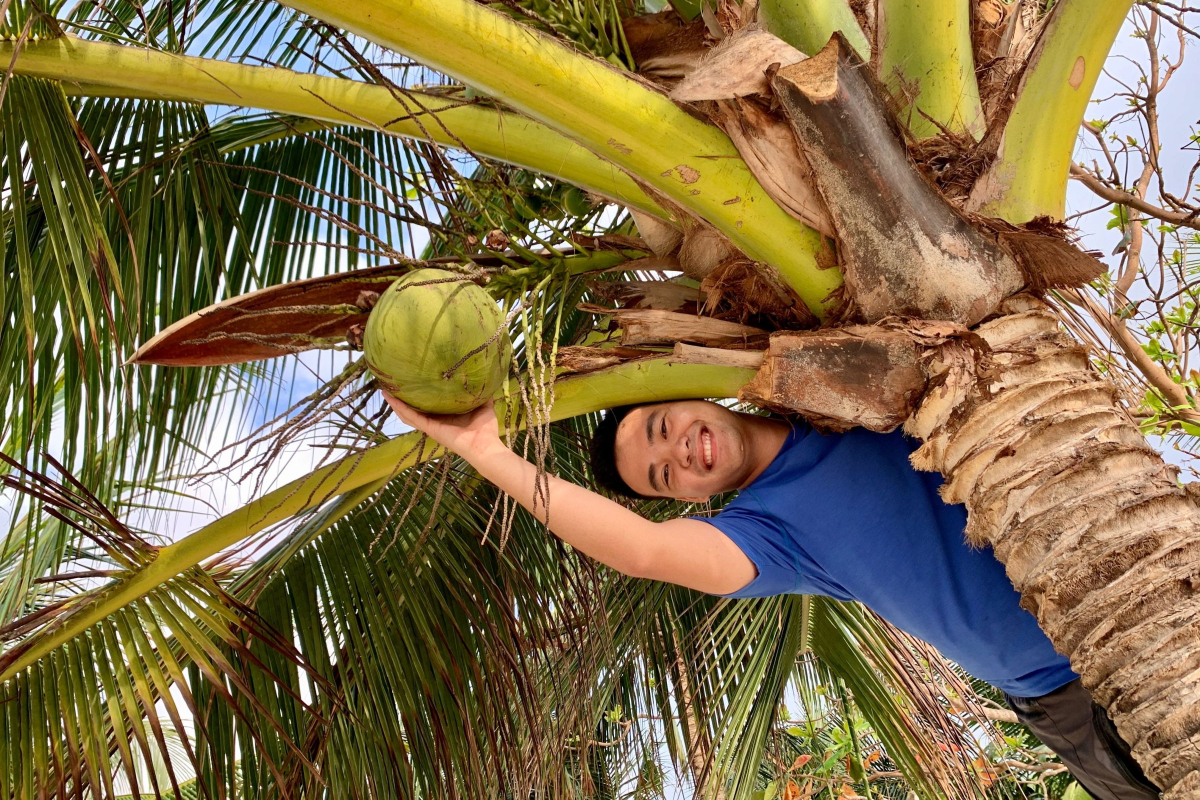 Like its East Coast counterpart, West coast tall trees take about seven years to bear fruit and you’ll obtain about 80 coconuts a year. Its juice is very sweet.

How To Keep Coconuts Fresh?

Let’s say you just cracked open your coconut and you’ve enjoyed maybe a cup or two of its refreshing and tasty water but want to save the rest for later, what do you do to keep it fresh!

It’s all about the proper storing; if your coconut is open then you should keep it in the fridge, this will buy you a couple of days only. What you really don’t want is to leave your coconut water outside the fridge for more than 3 hours.

When it comes to storing coconut meat, the secret is to keep it cooled. All you have to do is cut the coconut meat into pieces and transfer it into a Ziploc bag or container, make sure it is tightly covered, and put it in your fridge. Your coconut bits will stay good for five days.

If your coconut is unopened, then don’t sweat it, it will stay fresh at room temperature for a good four months. Preferably, find a spot that’s cool and dry.

How To Store Coconuts So It Stays Fresh For Longer 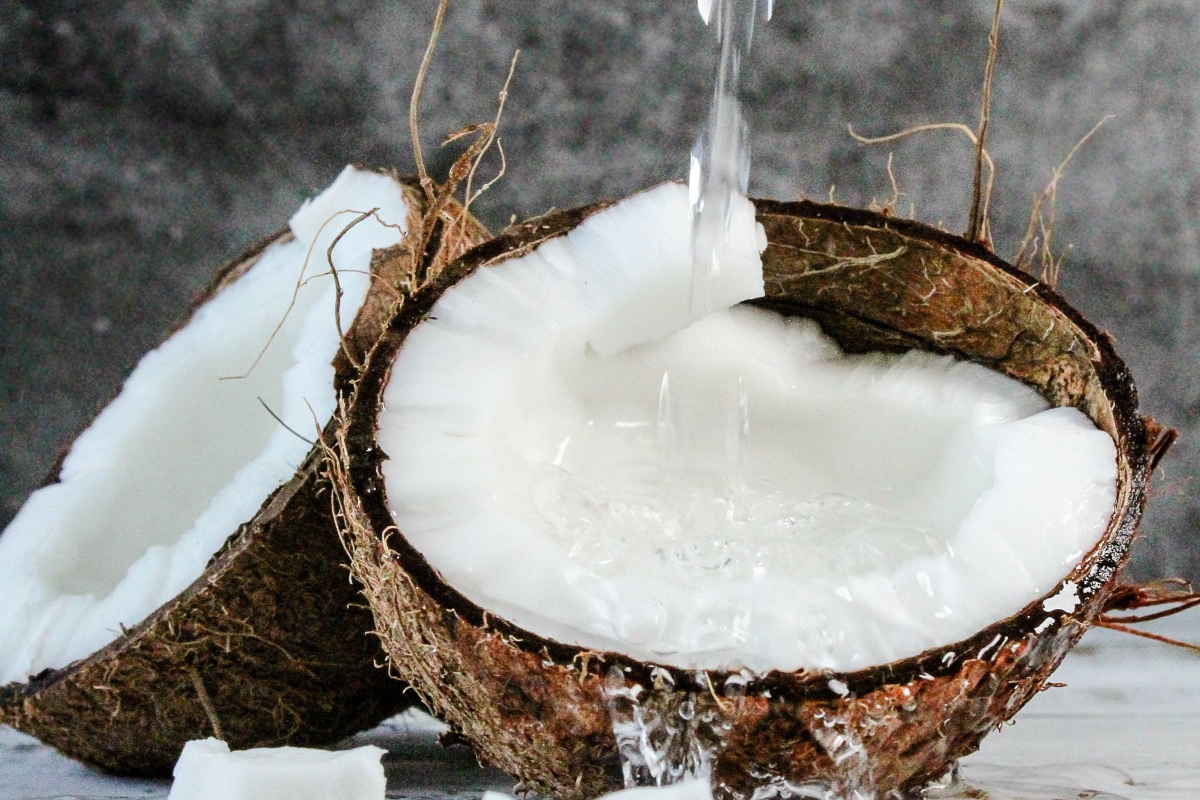 If you wish the coconut to stay fresh for a longer period of time, then you’ll have to freeze it using ice cube trays or freezer bags.
A good idea is to grate your coconut pieces, press out the water, and put it in a container. Your coconut will be good for up to four months.

Can You Freeze Coconuts?

Yes, you absolutely can freeze coconuts if you want to save them for later and retain their freshness for longer periods of time.
You should also remember that fresh coconuts are recommended to be eaten as quickly as possible because they tend to go bad quickly since they are high in oil.

What To Do With Coconuts Before They Go Bad?

Before your coconut goes rancid, there are tons of delicious recipes you can use it for. Coconut meat or flesh has been used in numerous cuisines around the world and contrary to what you may think is not only delicious in desserts.
Coconuts have been used to add a savory but delicate flavor to stews, soups, and even curries. Check out below some of our favorite recipe ideas.